What is focused ultrasound?

Focused ultrasound (FUS) made headlines in the United States recently with the FDA approval of the therapy for ablation of prostate cancer. As the Education director at an accreditation consulting firm specializing in diagnostic imaging, I was immediately intrigued by this new form of treatment and wanted to know how it could be used to potentially treat cardiovascular diseases.

Focused ultrasound is currently approved in the US for bone metastases, uterine fibroids and now prostate cancer. It is approved outside of the US for many other cancers, pain relief and brain disorders. Current research and clinical trials in development for applications of focused ultrasound are underway for neurological, musculoskeletal, oncological, women’s health, cardiovascular, urological, endocrine disorders and more. Every day there are new articles on the potential applications of this treatment (a search for focused ultrasound today comes up with “First Trial of Focused Ultrasound in Depression Under Way” and “Doctors use MR-guided focused ultrasound to treat essential tumor”). It even has the potential to disrupt the blood-brain barrier, allowing for targeted drug delivery. (1)

How does it work? 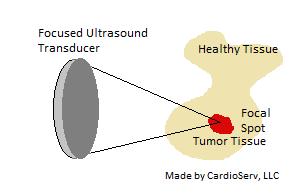 The most fascinating aspect of focused ultrasound is that it is non-invasive. An acoustic lens concentrates intersecting beams of ultrasound on a single point. A single ultrasound beam will pass through tissue but the convergence of the beams on a point induces biological effects that depending on the tissue can treat disorders. These mechanisms include thermal ablation or vasoconstriction. (See the biological mechanisms here). The process is extremely precise and can target a point as small as 1×1.5mm in diameter. (1) It is also allows for adjustments in power and size of focus, making the treatment extremely individualized. The procedure is usually guided by diagnostic ultrasound or MRI. Currently, 7 companies manufacture focused ultrasound devices in the United States. (You can see the full list of manufacturers here)

For cardiovascular diseases, hypertension is the first to move from the early stage laboratory phase to being researched in clinical trials. Clinical research at Chongqing Medical University has shown that focused ultrasound can control blood pressure through renal denervation. (2)

Research into using focused ultrasound to break apart blood clots is underway. Studies have shown that the vibrations from ultrasound energy can result in clot lysis or more easily treatable by thrombolytic therapy. The same process could potentially be applied to allow for the reperfusion of occluded blood vessels from atherosclerosis. (3)

Histotripsy is a procedure in which focused ultrasound precisely destroys tissues mechanically rather than thermally. Extreme pressure changes are created which create microbubbles in the tissue. These microbubbles collapse resulting in cellular destruction. (8,9)

Studies have shown this technique can be used to perforate the atrial septum and create an atrial septal defect in vitro (6) as well as in canine models (7). The separation of the atrial septum is also necessary in some patients with Hypoplastic Left Heart Syndrom (HLHS). This technique can also be applied for ventricular septal ablation in hypertrophic obstructive cardiomyopathy and congenital aortic/pulmonary valve stenosis.