What is Chagas Disease?

Earlier this year the American Society released a new guideline paper on Chagas Disease with recommendations for cardiac imaging.  What the heck is Chagas Disease?!  Then after never hearing of Chagas Disease in relation to cardiology it suddenly began to pop up in more and more articles and conferences.  A couple weeks back, in September, the American Heart Association released a scientific statement paper, Chagas Cardiomyopathy:  An Update of Current Clinical Knowledge and Management.  I decided it was time to learn more about this and share my findings with our community.

This blog will review both the American Society of Echocardiography’s Recommendation Paper and the American Heart Association’s Statement Paper and review:

What is Chagas Disease (ChD)?

Chagas Disease is a parasitic disease caused by an insect bite (by the protozoan parasite T. cruzi) and can also be spread through blood transfusions, mother-to-fetus and contaminated food.  Without successful treatment the infection is a lifelong disease causing one third to suffer from serious cardiac disease. Ordinarily, ChD was considered a “tropical disease” only found in Central and South America yet Chagas Disease now affects at least 300,000 US residents.

Why Does Chagas Disease Affect the Heart?

The pathophysiology behind Chagas Heart Disease is an inflammatory cardiomyopathy caused by:

These underlying mechanisms affect the heart both structurally and functionally.  Structurally, the myocytes are affected through an inflammatory process that eventually leads to a reactive fibrosis (dense collagen that surrounds myocardial fibers).  This cell damage from inflammation and then subsequent fibrosis causes:

The acute phase of Chagas Disease, regardless of symptoms, is marked by microscopically detectable parasites that drop off after 8 to 12 weeks.

If a patient goes untreated (often because it was undetected) the patient enters Chronic Chagas Disease.  These chronically infected patients are able to transmit the disease through mother-to-fetus, blood transfusion, or organ donation.

The acute phase is followed by the indeterminate form of chronic Chagas Disease.

The AHA Statement Paper identifies the rate of progression with dilated cardiomyopathy at a rate of 7% annually.  “It is very relevant to emphasize that as long as their ECG remains normal, the prognosis for these patients is good, with most surviving without major complications for > 5 to 10 years” (AHA, 2018, p.176).

Chagas Disease can eventually develop into Chagas Heart Disease.  The trick is identifying which patients are going to progress into heart disease.  So far the most common parameter is the ECG.  RBBB with or without left anterior hemiblock is a marker for a patient transitioning from indeterminate to chronic cardiac Chagas Heart Disease. 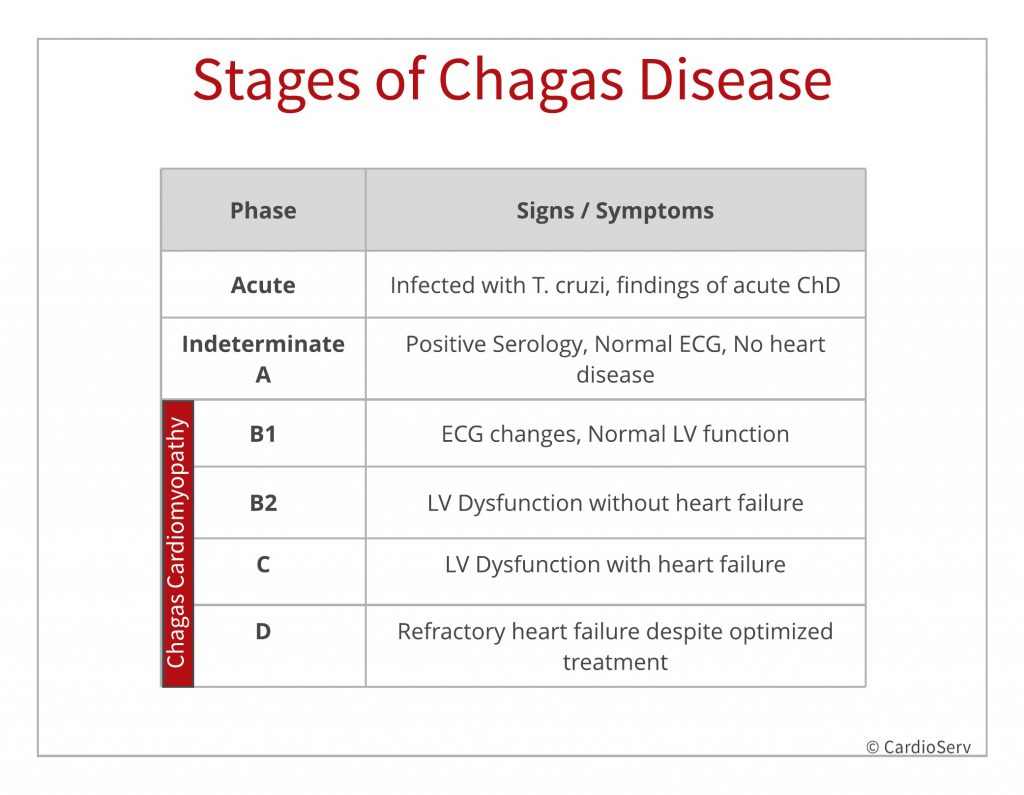 “Chagas heart disease is considered an arrhythmogenic cardiomyopathy characterized by atrial and ventricular arrhythmias and a wide variety of abnormalities of the conduction system” (AHA, 2018) 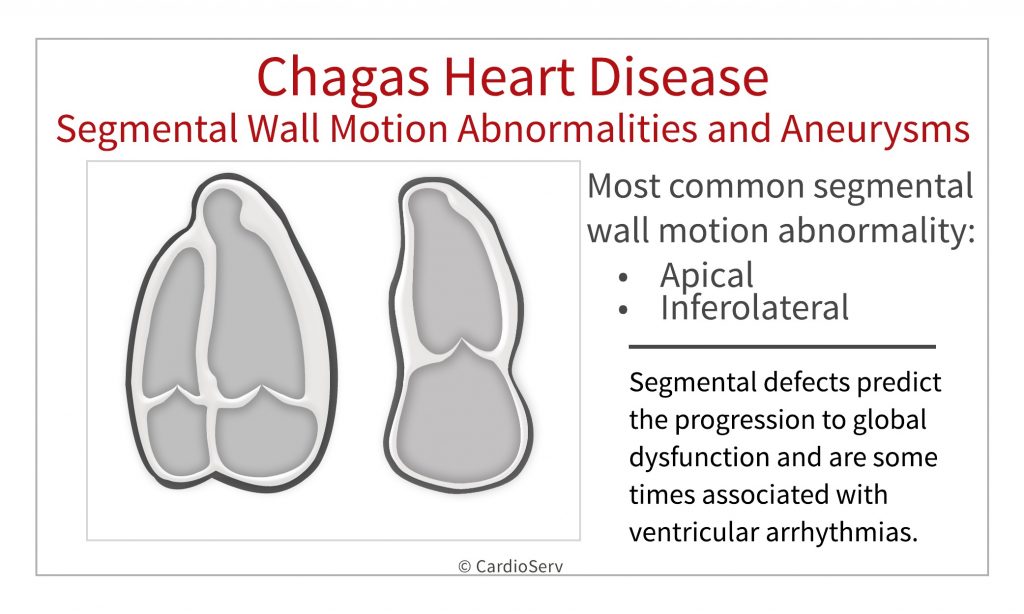 Echo plays a vital role in the diagnosis of Chagas Disease.  Echo findings include:

Chagas Disease is caused by an insect bite (by the protozoan parasite T. cruzi) and in the acute phase it is usually asymptomatic or presents with only mild flu-like symptoms.  If left untreated acute Chagas Disease is followed by the indeterminate formed (positive serology T.cruzi and NORMAL ECG) before eventually developing into Chronic Chagas Disease which can cause Chagas Heart Disease.  Chagas Heart Disease presents with abnormal ECG, segmental wall motion abnormalities, LV aneurysms and cardiomyopathy.  Echo can be useful in identifying wall motion abnormalities, aneurysms and thrombus.

For more information on Chagas Disease we recommend you review the two articles from ASE and AHA: 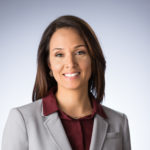 What is Chagas Disease?
https://www.cardioserv.net/what-is-chagas-disease-how-does-echo-play-a-role-in-diagnosis